Do your sex positions cause UTIs?

One of the biggest risk factors for getting a urinary tract infection is sex.

A lot people who get UTIs that just keep coming back find that they are more likely to get UTIs after sex, and maybe you’re looking for more information because you’ve noticed this pattern too.

Research has shown that having sex really often, having sex with a new partner, and using spermicide might all contribute to your risk of developing a UTI.

Spermicides can upset the balance of bacteria in the vagina and urinary tract, and are associated with a decrease of lactobacillus (the “good” bacteria). For this reason, it’s good to check that products you use do not contain spermicide.

And this might seem like an obvious one, but UTIs are more likely to occur in women rather than men because of basic anatomical differences: in women, the urethra is shorter and also closer to the anus. These two differences make it much easier for bacteria to move up the urinary tract and set up shop!

Not only are UTIs (or cystitis) more likely to happen in women, they are also particularly common in women who are suddenly more sexually active than they were previously, or are in a new relationship and enjoying a ‘honeymoon’ period. It’s because of this risk factor that you might now see UTI sometimes being referred to as ‘honeymoon cystitis’ or ‘honeymoonitis’.

Becoming more sexually active means that naturally there is a greater chance of bacteria finding their way into the urinary tract and causing a UTI after sex.

Also, research has found it is likely that bacteria normally living in a female bladder are very different to the bacteria living in a male’s! So this might cause problems if you’re exposed to bacteria your body isn’t used to, which might happen, for example, with a new partner.

What about sex positions?

One research study suggested that women who reported using the ‘female superior position’ (woman on top) were more likely to get UTIs.

Having sex gives bacteria, which may live in or around the anus, or from your partner, the chance to move into the vagina and travel up the urethra, where they can invade the urinary tract and start an infection.

Although bacteria can be transferred between sexual partners, it is important to note that this finding on the relationship between sex positions and UTI risk has not been backed up with further studies and evidence.

What we do know is that if you are trying to prevent UTIs, it could be worth thinking about certain sexual practices, for example, showering before and after, or trying a lubricant. Are there any changes that you could make to reduce the risk?

What works for some may not work for everyone. 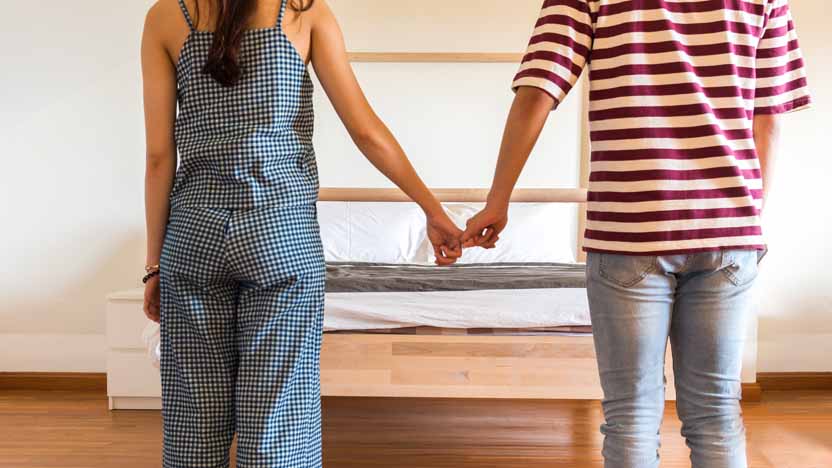 What UTIs mean for relationships

So sex can be a risk factor for UTI, and maybe you are thinking about getting into the habit of washing before and after sex, or experimenting with natural remedies for UTI like supplements, probiotics for UTI, or maybe different types of condoms.

But it might feel like UTIs, and the steps you take to avoid them, are taking over your life a little bit, and maybe you are also worried about what kind of impact this will have on your relationship…

The best first step is to take care of yourself and your mental health - have a look at our blog for World Mental Health Day for some ways to fit some self-care into your day when you are dealing with UTIs.

Another important note to make here is that sexually active women are not to blame for their developing UTIs. Urinary tract infections are incredibly common, and there a number of other factors aside from sex which can make women more susceptible to infections.

Get a better idea of what it is you need in terms of UTI prevention and treatment by speaking to your doctor and doing some of your own research, find out what helps with your symptoms, and whether there are small steps you can take to make cystitis more manageable.

With your partner, hopefully you are able to have an open discussion about your needs, and conversations about how you can try doing things differently to make things more comfortable, and reduce the risk of infection.

How to prevent UTI after sex

Here are some useful prevention strategies for avoiding UTI after sex:

Also make sure to thoroughly clean any sex toys if you are using them - TestCard’s Chief Medical Officer suggests that the use of sex toys can also be a risk factor for pushing bacteria up into the urinary tract, but -

“Your chances of your sex toys causing a UTI are low if they are cleaned properly after each use. [...] Avoid porous toys made from materials like PVC as they can gather bacteria even after cleaning them. To lower the risk even more, use a condom with your sex toy to really decrease the risk of causing an infection.”

You can read the full article by Dr Andrew Vallance-Owen (TestCard’s CMO) here.

Can I have sex with a UTI?

There isn’t any evidence to suggest that having sex with a UTI makes the infection any more severe, although this may be uncomfortable and could irritate an already irritated area, so it might be best to hold off until your symptoms have cleared up.

No, cystitis is not an STI. However, as we’ve described, bacteria can be transferred between people during sex, and this bacteria could invade the urinary tract and cause an infection.

Studies using couples have shown that the same infection-causing bacteria can be found in both people, so it is possible for bacteria to be harmless for one of you, but if transferred during sex could cause infection in the other.

If UTIs have been a recurring issue for you, it might be worth your partner getting tested as well, to find out if they test positive for the same bacteria that is causing your cystitis.

Also, it might be that if you see a doctor about urinary symptoms like pain when peeing, needing to pee a lot and urgently, they want to test for STIs as well as UTI, because some infections share some of the same symptoms.

But if you are experiencing multiple signs of a UTI and are worried that you may have an infection, it is important that you do a urine test as soon as you can, which you can do at home with the TestCard UTI test kit (available on Amazon, or at any of these pharmacies: Superdrug, Dears Pharmacy, Zava , Midway Pharmacy, Weldricks Pharmacy). Chemist4u